I utilize the Circaid Reduction kits frequently in my clinic, so when I was presented with an unusual request to treat a horse that was scheduled to be euthanized, I thought “what could it hurt”! I had less than a week to make a difference to give “Everest” a chance at life. Desperate times led to desperate measures… She was in a lot of pain and was not able to bear weight on L back leg. Swelling had been progressively getting worse over past 6 months following a snake bite. The swelling was starting to separate her hoof. I measured her leg and fitted her with the full leg pieces. She had wounds that had to be treated daily so the access the Reduction kit allowed was perfect. After three days, she was able to walk with minimal limp and several weeks and many adjustments later she was running in the pasture… which really caused the garments to slip down! So thankful they worked and the owner was very pleased to cancel the Vet visit. 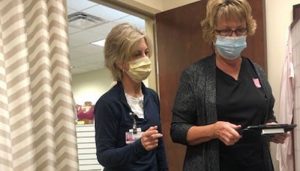 I work for Aggressive Health Solutions as a Certified Mastectomy Fitter. I work almost every day with our lymphedema Therapist, Margaret Allen. We both started around the same time and share a great working relationship and friendship. She is a little OCD, and I am not at all so I tend to think we balance… 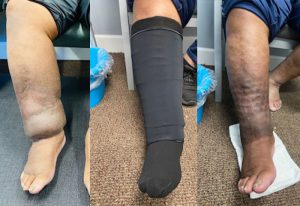 This patient came to us after “years” of undiagnosed lymphedema of the right lower leg. He spent his career as a surgical technician at the local hospital where he was required to stand for extended periods of time. He was also unable to go through complete decongestive therapy as he was unable to wear bandages…

This website uses cookies to improve your experience while you navigate through the website. Out of these, the cookies that are categorized as necessary are stored on your browser as they are essential for the working of basic functionalities of the website. We also use third-party cookies that help us analyze and understand how you use this website. These cookies will be stored in your browser only with your consent. You also have the option to opt-out of these cookies. But opting out of some of these cookies may affect your browsing experience.
Necessary Always Enabled
Necessary cookies are absolutely essential for the website to function properly. These cookies ensure basic functionalities and security features of the website, anonymously.
Functional
Functional cookies help to perform certain functionalities like sharing the content of the website on social media platforms, collect feedbacks, and other third-party features.
Performance
Performance cookies are used to understand and analyze the key performance indexes of the website which helps in delivering a better user experience for the visitors.
Analytics
Analytical cookies are used to understand how visitors interact with the website. These cookies help provide information on metrics the number of visitors, bounce rate, traffic source, etc.
Advertisement
Advertisement cookies are used to provide visitors with relevant ads and marketing campaigns. These cookies track visitors across websites and collect information to provide customized ads.
Others
Other uncategorized cookies are those that are being analyzed and have not been classified into a category as yet.
B2B Portal
Holiday Schedule